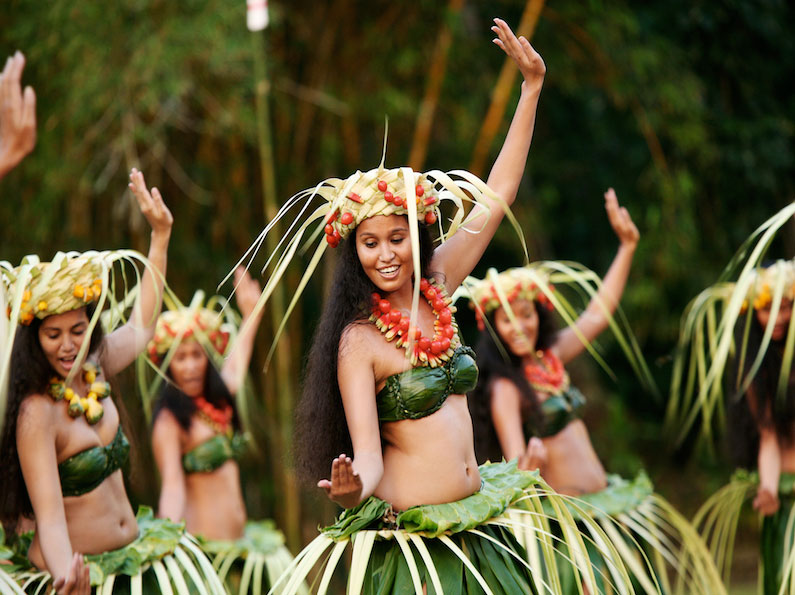 Nietzsche could have said about their odd destiny that “everything that did not kill them finally made them stronger”… But this would not have happened on its own and even surely wouldn’t have at all, if Madeleine Mou’a was not born to this world and if she had not come on earth to save Tahitian dances from oblivion…

Although traditional Tahitian dances survived to the present day, they owed it historically to the Tiurai festivals (renamed Heiva in 1985) which, since 1881, were organized at the same time as those of July 14 (French national holiday); in the context of a symbiotic interaction of the two events that contributed indirectly to preserving Polynesian culture in general including the Tahitian dances. But our fascinating Tahitian dances also and above all owe their survival to the faith and perseverance of Madeleine Mou’a, a visionary and enlightened dancer / choreographer who brought them back to life by truly encouraging their redeployment, respecting the fundamentals of the ancestral art of “ori tahiti” (word meaning “dances” in Maohi language) … History of a true resurrection:

From 1797, the first Protestant missionaries arrived in Tahiti. From then on, the process of Christianization began, resulting in an inexorable deculturation of the populations which at the same time, were acculturating themselves to new spiritual, societal and social values; until the conversion of the whole population to Christianity, which intervened quite radically in 1815 (at the time of the fall of the Napoleonic Empire). No one will be surprised to learn that the missionaries of the early ages of the colonization, did not see favourably the Polynesian tribal dances which spontaneity, naturalness and sensuality did not exactly fit with the puritanical values ​​of western societies, in these very first years of the 19th century …

Dances got soon forbidden ; this because in the perception of the missionaries, they were evidencing and demonstrating far too unambiguously and far too strongly the cultural and societal fact of an absence of taboos related to body and sexuality. When the France of the July 1830 Monarchy took possession of the country in 1842, it adopted a more liberal position: The colonial administration authorized the tribal dances, while censoring the most liberated forms of choreography (of which especially the “upa-upa”, ritually danced by couples in a manner that was too explicit in the light of the criteria of French morality, at the time).

The advent of the first Tiurai festivals from 1881 onwards allowed Tahitian dances to survive in the annual setting of these festivities initially designed by Queen Pomare IV to bring together metropolitan and local cultures. But for the Tahitian dances, it was only a respite, for new dangers began to threaten them, especially by the end of the fifties… Dangers that to be less evident than previous religious interdicts had formerly been, were no less formidable: Coming first in the top three of risks, the consumer society with its enormous power to destroy cultures, folklores and ancestral arts.

In the second place, the opening of Tahiti and its islands to the big world via the maritime links and the first air links. This connection with the world had introduced new tastes, new musical styles and new dances which had contributed to a certain neglect of the traditional art of “ori tahiti” … But the third danger was surely the worst: For years, the Tahitian dances had shown a propensity to somehow “withdrawing into themselves”, to the point of involuting. Dances were involving only island communities or some districts of the island of Tahiti, being never or too rarely the “must see” or the “highlight” in any “general public” representations.

Dances were then incapable of impacting the Polynesian identity to a point they would have been able of ranging in the “top of mind” … They were remaining an art that was unknown in most of the cases, almost a relictual art reserved for insider circles. The Tahitian dance had ended by “reproducing itself” or even “emulating itself “, in a sort of clandestinity… And clearly, that by itself could kill Tahitian dances more surely than all the other dangers

It was in 1956 that Madeleine Mou’a, a Tahitian school teacher, became aware that the position of the Tahitian dances had got extremely precarious, realizing also that their time was counted if nothing was done timely to bring dances back to light and even to promote them … The late fifties have in many respects, been the years of a strong revival of the Polynesian cultural consciousness. This context certainly contributed to making the local minds more receptive to the message Madeleine Mou’a was so keen on addressing to the Polynesian cultural identity by bringing the dances back… The context did help, but it did not do the job.

Madeleine did it entirely… She had the visionary idea to revive Tahitian dances by placing them in “front of the stage”, after a stay in France where she had seen folk groups from different regions. In that, she saw evidence of the possibility of saving the “Ori Tahiti”, as did these French regional authorities …

On her return to Tahiti, Madeleine Mou’a created a dance group that she called “Heiva”. Success grew from year to year. The ballets given by “Heiva” at the Tiurai dance tournaments forced the admiration and even the emotion of all. These ballets addressed to all Polynesians the message of a new cultural dignity and identity. In a few years, Madeleine Mou’a became the “high priestess” of dance, endeavouring to rediscover the fundamentals of the original tribal dances and to preserve them, while adding the candid grace and refined elegance of her own choreographic creations.

Thus, as a true pioneer on the land of her own culture, Madeleine Mou’a managed to save the traditional Tahitian dances from the sad “death by oblivion” that was awaiting them; to indeed bring them back to life, as well as to the eternal youth of bodies and souls …

Like the Polynesian culture viewed as a whole, our traditional Tahitian dances really come back from afar. Indeed, they have escaped the three powerful forces of deculturation that were Christianity and later, the consumer society and globalization. But thanks to Madeleine Mou’a, they also escaped the oblivion, the disinterest and the cultural immobility which were threatening them very logically because of a too rapid transition from the archaic Polynesian societies towards the Western model …

Nietzsche said: “Anything that does not kill me makes me stronger”… The analogy with the destiny of Tahitian dances is tempting, as it is true that what should logically have made them disappear has finally made them stronger, more dynamic, more radiant and more creative … But without Madeleine Mou’a, the dances would surely have sooner or later been “killed” by what had to do it… Thank you Madeleine!